So as many of you know I love theme parks, well to be clear not just any theme park, but specifically Disneyland and Disney World.  I am somewhat of a fanatic.  Needless to say my passion for Disney has left my expectations for anything in the amusement park genre to be held to a certain level of expectation and this often leaves me disappointed since no one can do it better then Disney.  Nonetheless, we live 30 min from Hershey and I have been begging Eli to go with me to Hershey Park since we moved here because I hadn't been to the park since I was in middle school (good ol' middle school class trip).  Well since  he was done with finals he had no more excuses so we went this past weekend.
I just want to start out by saying it was 95 degrees and 95% humidity the day we went...what were we thinking, right?  We busted right over to the newest ride in the park, Fahrenheit which boasts a 97 degree drop that is the steepest in the country.  After waiting in line for 1 1/2 hours (which I haven't done in years thanks to the Disney invention "fastpass") I wanted to hurt myself.  Finally we rode the ride and it was well worth it and quite the rush.  I almost felt a little queasy after I got off.  Which would explain why just outside the ride, in the line to get hot dogs, a kid barfed right in front of me just as Eli was paying.  The weird thing is that he just wiped off his mouth and took off to ride another ride.  Eww.
We took a little monorail ride around the park where we saw the chocolate factory.  The Hershey Outlets are right by the park and many a day I have been shopping over there and come out of my favorite store to smell chocolate filled air.  Chocolate and shopping...it couldn't get any better!  So if you ever wonder where your chocolate is coming from now you know!

In one of the highlights of the day we decided to take a ride on the "Kissing Tower" which is more of a scenic ride that takes you 330 feet up to see Hershey from above.  I don't know what scared me more, the sign I read on the way into the ride (cm'on does it really have to use the word "moisten") or the fact that the ride operator full on fell asleep while we were 330 feet in the air.  I'll let you decide... 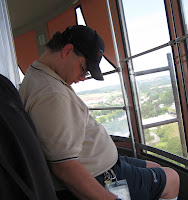 In our final shining moment at the park Eli and I were just walking out when we passed by a large stage where a band was playing and people were dancing.  At this point I had become accustomed to the large candy bars and kisses that were wandering around the park like celebrities, which I still don't get why anything you would eat, digest and release back into the world in a new form would be fun to get your photo with but that is just me.  Then we came across this little guy or should I say large "log" shaped guy cutting a rug when Eli suddenly stopped and said, "Is it just me or does that look like a giant piece of..?!"

I have never laughed harder in my life, it looked exactly like... a giant piece of a Nutrageous bar dancing the night away! (what did you think I was going to say?)  Yum Yum kids, eat up!

ONLY YOU would get a picture of a giant poo dancing around! Welcome to the blogging world, I am so excited you started one! Now I will know exactly what is going on in your life at all times. :) I am going to donate $20 to your cause by the way, just because I love you so much.

Two things I hate. The MOISTEN sign cuz it has the word MOIST in it, and that candy bar scares me. Yay! You're a blogger! Now you need to add the blog list that tells you when people post so you don't have to check people's blog for no reason. It saves time. Love ya!